Few know the “powers that be” behind shipping, but at the beginning of June, a central person in the world shipping, passed on. Below is an article from Cruise Solutions, giving us an glimpse of a shipping empire monarch. A bit more about the Ofer Brothers, and here’s another news story about his death.

Sammy Ofer passed away Friday 3rd June, a member of the Royal Navy during the Second World War, and a major shareholder in Royal Caribbean Cruises. Ofer was a businessman, shipping magnate and one of the wealthiest people in Israel. His shipping interests included not only Zim Integrated Shipping Services Ltd and Zodiac Maritime Agencies Ltd in London, but also a 16.5% interest in Royal Caribbean Cruises Ltd and a 12% stake in South Korea’s Hanjin Shipping Co Ltd. 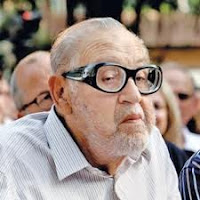 Born in Galatz, Romania, on February 22, 1922, Sammy Ofer, then known as Samuel Herskovich, immigrated with his family to Palestine in 1924 and settled in Haifa. Starting his career with Haifa-based shipping agency M Dizengoff & Co Ltd, with the outbreak of the Second World War, he enlisted in the Royal Navy and served as a petty officer in a minesweeper based at Alexandria. He later also served as an officer with the Israeli Navy.

Ofer’s first ship purchase was the 460-ton motorship Eyal, named after his eldest son. The Eyal ran for Mediterranean Seaways Ltd, which was founded by Sammy and his brother Yuli, together with Mordechai Mano, in Haifa in 1956 to run services in the Mediterranean, to the Adriatic and to Bulgaria and Romania. Mano left the association ten years later to found Mano Maritime, which today operates the cruise ships Golden Iris and Royal Iris out of Israel.

The Ofer brothers meanwhile expanded into other areas of shipping, amassing a fleet of well over 200 bulk carriers, tankers and container ships, as well as taking an interest in Royal Caribbean Cruises Ltd, and in real estate and banking. Sammy’s son Eyal took his father’s position on the board at Royal Caribbean in May 1995 and Sammy’s wife and Eyal’s mother Aviva sponsored Royal Caribbean’s Grandeur of the Seas at Miami in 1996.
Six years later, Eyal’s wife Marilyn also sponsored a Royal Caribbean ship when she acted as godmother for the Brilliance of the Seas at Harwich in 2002.